Evidence Based Practice for Physical Therapy

Formulating a strong clinical question is the first step in the research process.  PICO is a way of building clinical research questions that allow you to focus your research, and to create a query that better matches most medical databases.

Think about the keywords for each of the PICO parts of the clinical question.

The PICO parts with keywords for this question would look like this: 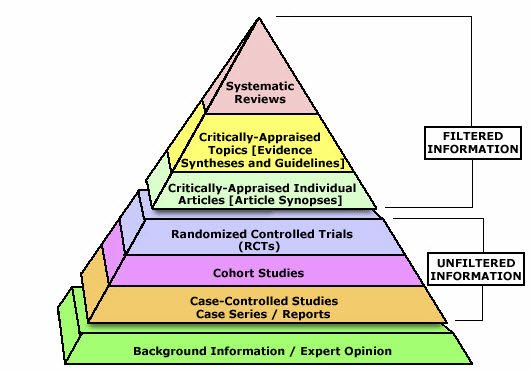 Always start an EB-PT search looking for the highest level of evidence. If a meta-analysis is not available on the topic, look next for systematic reviews without statistical synthesis, next for randomized control trials, next for controlled comparison or case control studies, etc.

Credibility: looks at truth and quality and asks, "Can you believe the results?"

Transferability: looks at external validity of the data and asks, "Can the results be transferred to other situations?"

Some questions you might ask are: Were patients in the treatment and control groups similar with respect to known prognostic factors? Was there a blind comparison with an independent gold standard? Were objective and unbiased outcome criteria used? Are the results of this study valid?

Dependability: looks at consistency of results and asks, "Would the results be similar if the study was repeated with the same subjects in a similar context?"

Some questions you might ask are: Aside from the experimental intervention, were the groups treated equally? Was follow-up complete? Was the sample of patients representative? Were the patients sufficiently homogeneous with respect to prognostic factors?

Confirmability: looks at neutrality and asks, "Was there an attempt to enhance objectivity by reducing research bias?"

Some questions you might ask are: Were 5 important groups (patients, care givers, collectors of outcome data, adjudicators of outcome, data analysis) aware of group allocations? Was randomization concealed?

4. APPLY: Use Evidence in Clinical Practice

Other good resources for both appraisal and applying evidence in clinical practice can be found on these two websites:

5. EVALUATE: Look at Your Performance